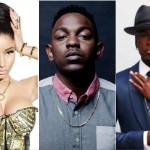 The line-up just got bigger. Nicki Minaj, Kendrick Lamar and Ne-Yo were just added to the bill.
MORE >>

Finally, Kendrick Lamar is about to release his third album. On March 6, the Compton, Calif., rapper shared an iTunes link to the anticipated release, showing that it is actually titled [Untitled] and will be released on March 23.

[Untitled] will feature 16 songs — however, the Grammy-winning “i” didn’t make the cut. The only other song revealed on the iTunes link was “The Blacker the Berry,” which Lamar released last month.

Terrence “Punch” Henderson, co-president of Lamar’s label TDE, once said that if “i” approached race pride like Dr. Martin Luther King, Jr., then “The Blacker the Berry” did so like Malcolm X, who challenged blacks to fight for their civil rights by any means necessary — including violence. This comparison seems fitting.

“I mean, it’s evident that I’m irrelevant to society/ That’s what you’re telling me, penitentiary would only hire me,” Lamar raps in the latter, as if with a clenched jaw and balled up fists.

Kendrick Lamar’s [Untitled] is available for pre-order now on Aftermath/Interscope. Listen to “The Blacker the Berry” below.

“The Blacker the Berry”

Get an eyeful of even more pop music coverage, from artist interviews to exclusive performances, on Idolator’s YouTube channel.