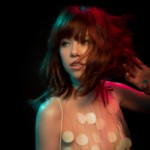 She talks "I Really Like You," her new album and channeling old-school Madonna.
MORE >>

Carly Rae Jepsen could have easily chosen a boy-meets-girl storyline for her “I Really Like You” video. Instead, she has actor Tom Hanks lip-syncing her lyrics as he roams around town, poses for pictures with fans and texts emojis to Jepsen herself. He’s the perfect video star, especially when he mouths the words “Who gave you eyes like that, said you could keep them?”

Later, Justin Bieber skips to catch up with the two of them at the front of a flash dance mob. He’s barely recognizable, perhaps because for once, he’s not taking himself too seriously.

“I Really Like You” appears on Jepsen’s third, still-untitled album, which will be released later this year. Earlier this week, she told Idolator to expect ’80s pop of her new music — think old-school Madonna. “I think my heart and soul does stick very much in the ’80s, because I feel that was the purest pop at its finest, like the emotional ’80s,” she says. “I think that’s what you’ll find with my album, it all goes there — in a new way, of course, but it definitely tips its hat to that whole era.”

Watch Carly Rae Jepsen’s delightful “I Really Like You” video up top.

Get an eyeful of even more pop music coverage, from artist interviews to exclusive performances, on Idolator’s YouTube channel.